Yes, this was me. I was posing. The catfish weren’t that heavy, I was messing around trying to make people think they were a heavy stringer. Just trying to show off my muscles. Of course now my beard is grey and a faded blond. 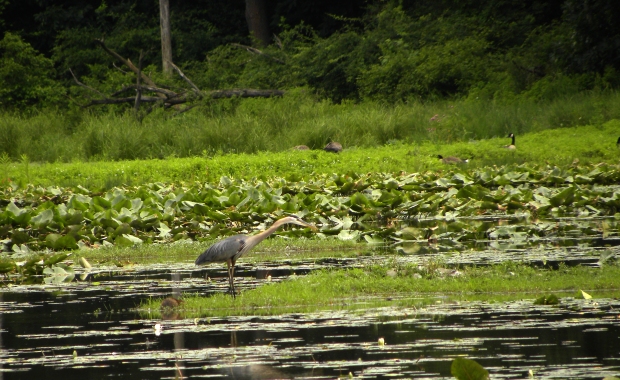 At the angle I shot this photo it makes everything appear crooked, but its not. Deceiving. The bird and beaver are hanging out on the island and both got along well. This was photographed at Brick Pond in Owego, NY.

A close up of one of the cliff dwelling flowers from Upper Treman State Park.

These flowers were growing on the face of a cliff in Upper Treman State Park.

Well, I wanted to get my son in this photo, so I got a washed out cliff in the process. The falls is the big falls, and if its raging you do not want to be in this gorge. You most likely wont make it out on two feet.

This is the next to last falls in the run in Lick Brook Gorge. It is pretty good sized, and when we have flooding it is quite impressive. The gorge itself is quite hidden, and requires a bit of hiking to get into. It is dangerous if you are not careful there, it contains a lot of loose shale cliffs. But it is an impressive gorge. In the winter at the big falls the Cornell ice climbers climb the frozen waterfall. It is the second highest waterfall on the eastern seaboard, second only to Taughannock Falls. My son is standing in front of the small falls for perspective. 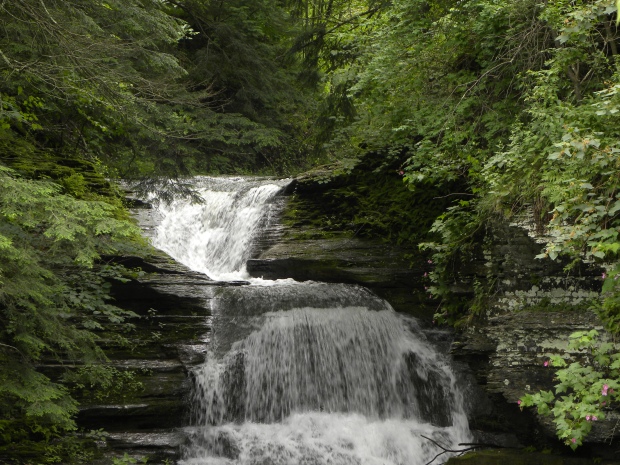 This is an unedited photo of the falls near the old mill in Upper Treman Park in Enfield, NY. Really beautiful area with many dozens of runs of falls throughout the many offshoots of streams.

Taughannock Falls is located North of Ithaca, NY, and is the highest waterfall on the Eastern seaboard of the United States. I think its supposed to be like 213′ tall. This was taken from the falls overlook using a film camera.

Caught these two interacting on an island and thought it would make some good shooting. I was right, took about twenty photos, and the lighting was pretty good.

The stonework done at Upper Treman Park is amazing and goes for miles. The arches and bridges are intricate and well crafted. The men who comprised the CCC camps built these beautiful structures, and their hard work still stands. 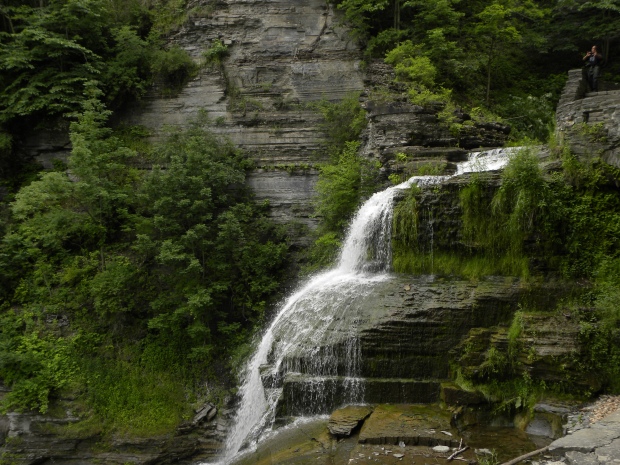 This is a much better photo of this falls. The lighting was about right, because it was an overcast day.

I popped off a shot from downstream of a family enjoying the water. Just below them the water turns turbulent – and if you fell in you may not get out. Hard to believe such a small feeder stream has so much force as it squeezes into the gorge.
There are a great number of waterfalls throughout the gorge at Upper Treman State Park, and it usually has a full years run of water.

Upper Treman State Park has a nice variety of waterfalls and can be a day trip for anyone who likes to walk. There are easy paths and tougher paths, either of them are beautiful.

I used my polarized sunglasses to shoot this photo. Gave it a real sepia coloring over the natural color.

This was photographed the same day that I was shooting photos at the plant nursery. I love the textures in the sky on this shot. 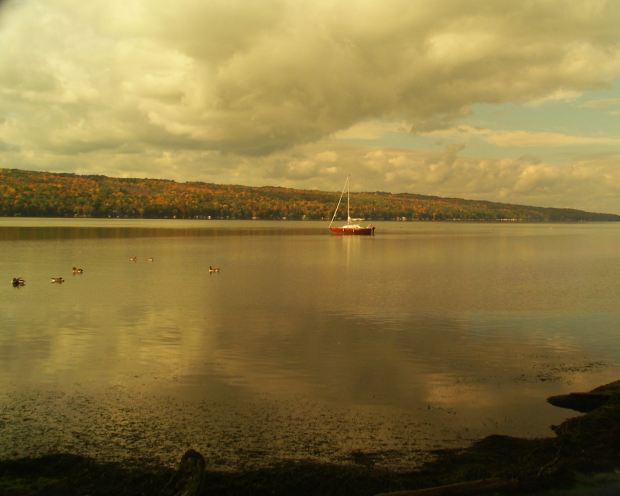 A stylized photo of Cayuga Lake in Ithaca, NY, from Stewart Park.

This was shot on a nice fall day at Upper Treman State Park in Enfield, NY. The sky was the brightest blue that day. I was using a 5 mp HP 3X zoom lens camera. I love the photos this camera captured.

The colors were bright when I shot this, but not this bright. I experimented with Jasc Paint Shop Pro and this is what I got.

No…really, eat a frog. They’re nutritious and I like them, and so will you. So go and eat a frog.

This is one of my favorite places, from any angle and with Photoshop work or none at all. 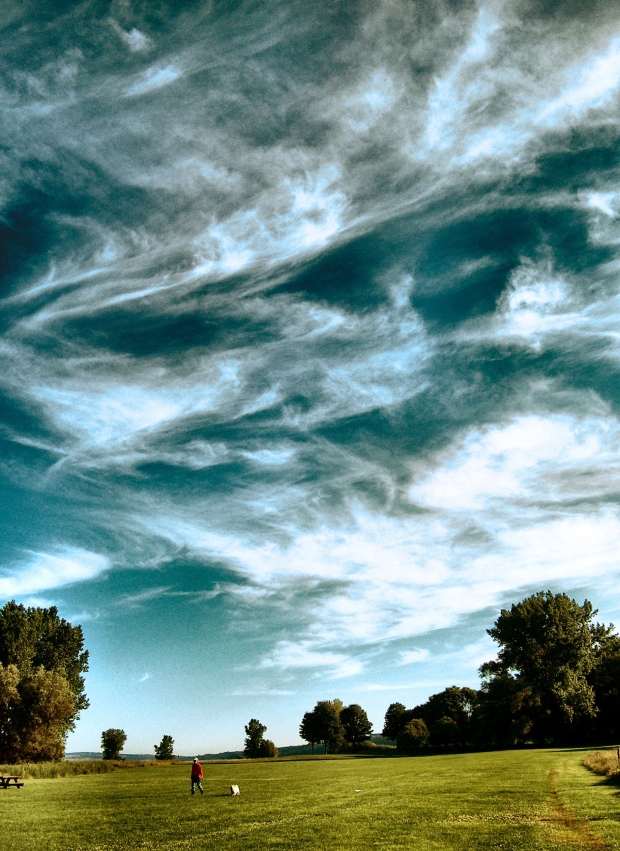 The clouds in this photo were beautiful. This was captured with an old HP camera with a 3X zoom and 5 mp. The person walking the dog shows the scale of the scene which was before me.

One of the pools at Upper Buttermilk Falls State Park. The colors there are usually a deep emerald and there are a series of falls and pools.

Wish it was like this now, rather than grey and cold. 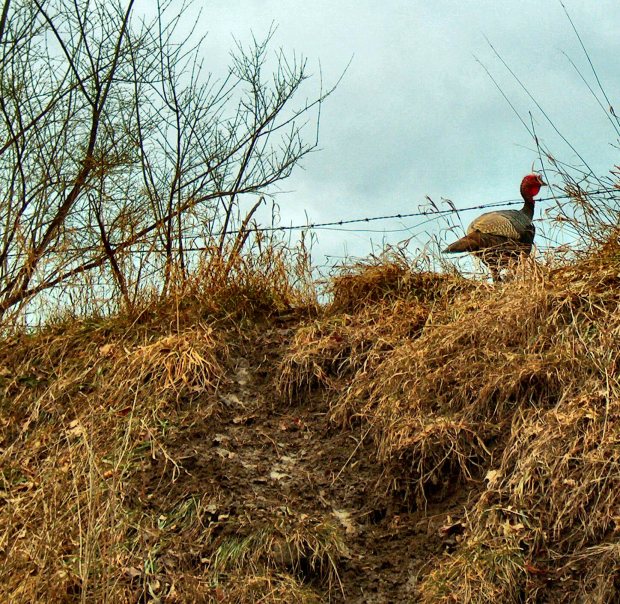 I caught this turkey just after it crossed the road, opened my window and got off two lucky shots with my camera. And for those of you reading this, please read my last post, The Idea Pool as it was years in the making, and tedious typing, and still very raw but says what it needs. Thank you.

Another perspective photo of the docks when they were just a little low in the water. 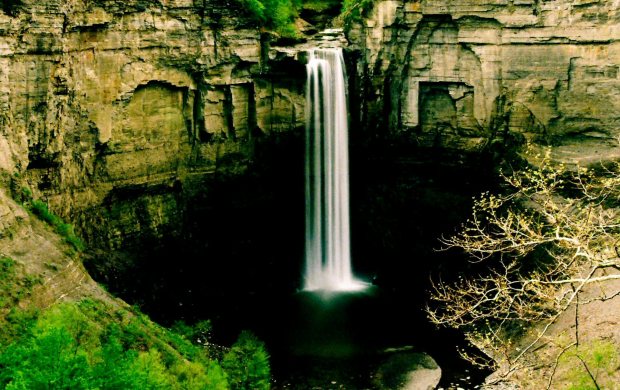 This is the highest falls on the Eastern seaboard of the United States, Located North-West of Ithaca, NY on the shore of Cayuga Lake. It was a great day for film for me. Shot about 4 rolls and about 400 digital photos. My passion is shooting waterfalls.

I love Cayuga Lake in Ithaca, NY. It offers me so many different photo ops. 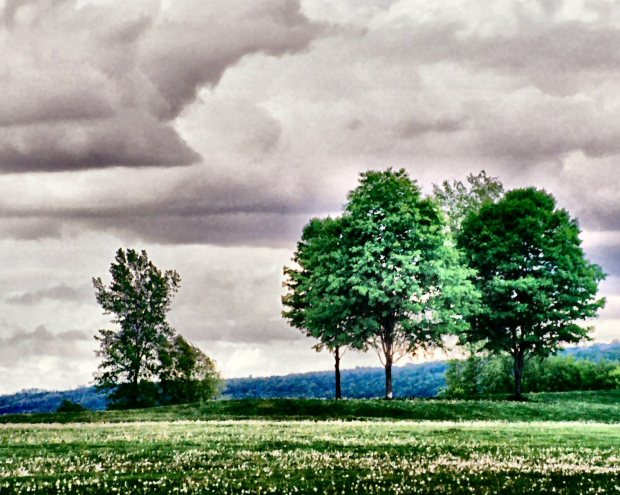 A cloudy day near a lake, white dandelions and a breeze. Now if winter would end I can get back out and get more photos like this.

Not sure if I have posted any of my cloud photos yet. If I have, sorry, too many photos, and too poor of organization to keep track. Anyhow, here is Cloud Two, maybe Cloud One will be posted soon also.

Another photo from Stewart Park in Ithaca, NY. I liked the way this photo looked after I worked it on the computer. The puddle leads me down the road to the willow at the far end. 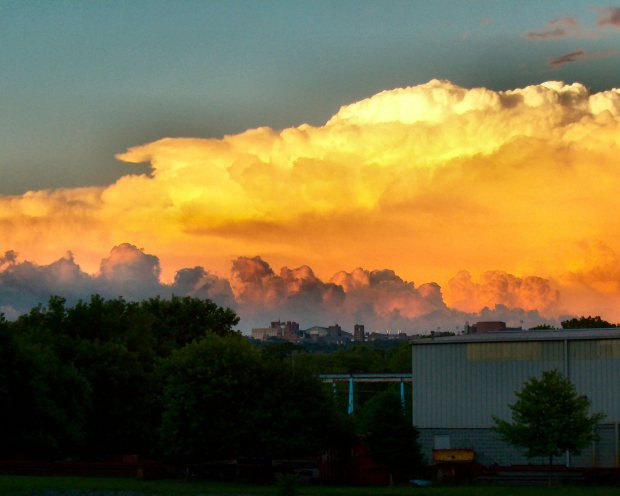 July 4th, a time for fireworks, brutal hot weather and sunshine. On this particular 4th of July in Ithaca, NY there was a very strange storm. The huge cloud hovering over the immense Cornell University on top of the hill was a golden color due to the setting sun behind my tripod. A cloud of green came up through an adjacent valley (yes a green cloud, which signifies a hail storm) and merged with this cloud over Cornell. It began to thunder and lightning and continued to for hours. I got some streaks of lightning on film going the length of Cornell University. It actually hailed and then the clouds began to drift away just in time for the fireworks. And I got some decent shots of them also.
If anyone has ever been to Cornell University they will know that the buildings on the hilltop are rather large, so that ill show you the scope of these enormous clouds.

There are at least 10 blue heron and 3 whitetail deer in this photo. Some of the heron are airborne, though most are on land. I made this a panorama to focus on the wildlife.

My shot of a beautiful scene thru the windshield of a moving vehicle. Not too shabby. 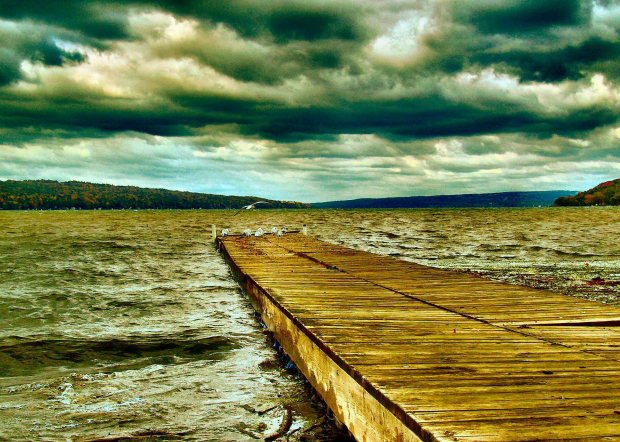 I shot this photo many moons ago using my first real digital camera. It was a 5 mp HP, and it only had a 3x zoom lens. It was a great learning tool. I snapped over 85,000 photos with it over a few years time. I like the moodiness I presented in the photo of the old dock which was on the shore of Stewart Park in Ithaca, NY. I used Jasc Paint Shop Pro to do the editing. One of my favorite muted color photos.

These berries stood out from the background nicely.

These falls are below the dam at Treman Lake which is within Upper Buttermilk Falls State Park. I captured it when the leaves were in full color, and have many other takes on this day. I like this one because it has a little of everything. 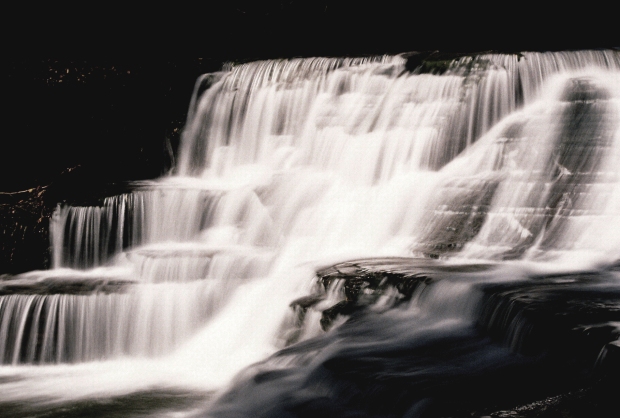 Upper Treman Gorge is a series of wonderful falls, about a mile worth or so. I spent many rolls of film in this gorge. 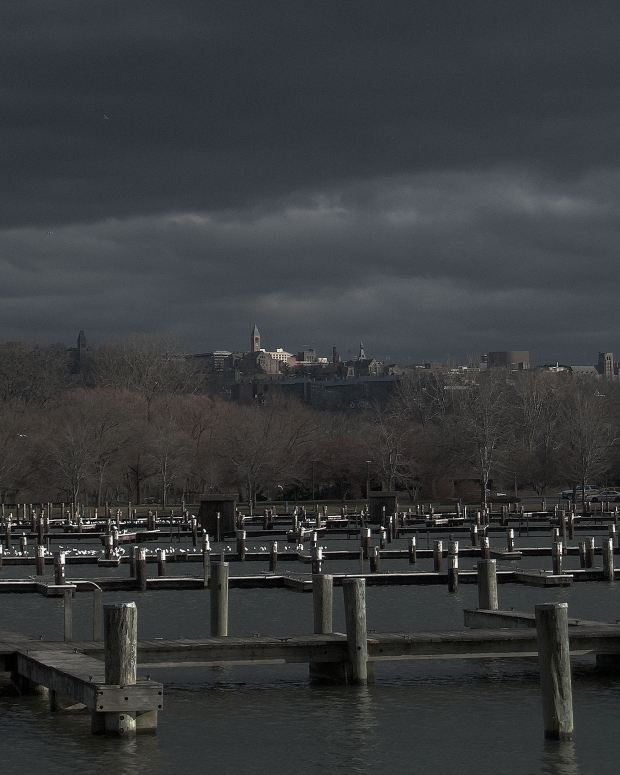 Cornell University as seen through the lens on a cloudy day from Treman Park Marina in Ithaca, NY.

A muted view of the Robert H. Treman Marina in Ithaca, NY during the very colorful fall. 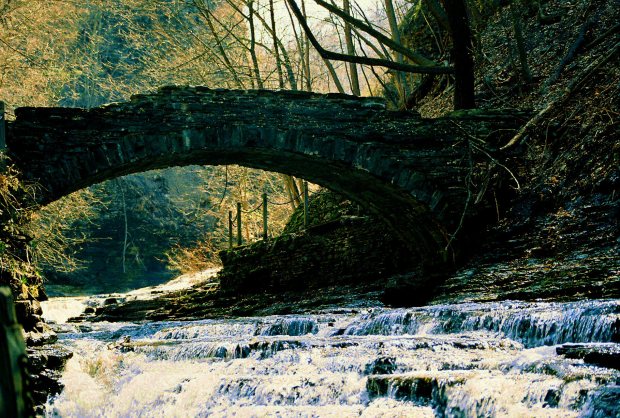 A stone bridge crosses Cascadilla Creek in the gorge where a trail leads to Cornell University in Ithaca, NY.

I played around in a photo program to give this a simple effect. The photo is of the South End of Cayuga Lake in Ithaca, NY. 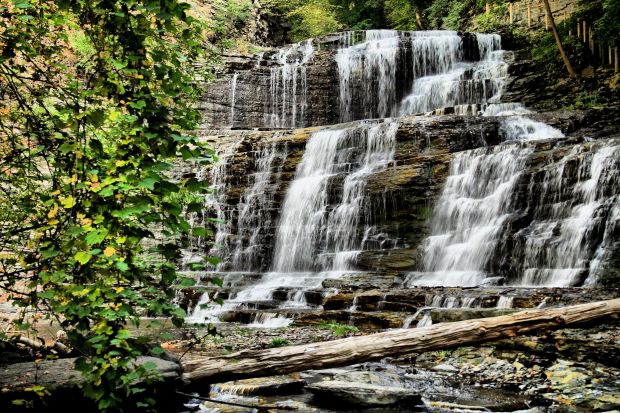 A photo of one of the falls in Cascadilla Gorge in Ithaca, NY, which is adjacent to Cornell University. I shot this with film and edited it in Jasc Photoshop (currently Corel Photoshop). One of my collection of area waterfalls.